Ebook and Iran Vs Michael

I am officially launching my blog publicly today! You will see I have been populating this with posts over the last month so there is some meaty stuff to read. Thanks for coming!

You have likely found your way to me based on my page in Seth Godin's "What Matters Now" ebook. See that PDF here: Seth's Godin's Ebook, What Matters Now.

I chose the word "Knowledge", because I am so passionate about building knowledge and insight through media. And so much of knowledge media is in trouble, so we must make change and now!


So, what about my essay and how does news shape our world? As I said, it is quite distorted, in fact, see below... 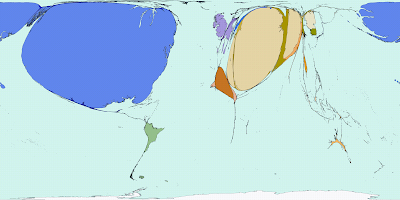 Pretty disturbing, eh? This map is based on my original research which was then fed into the cartography program created by Worldmapper. Check them out. http://www.worldmapper.org

I developed some original analysis of TV news broadcast coverage in March of 2007 by CNN, ABC, CBS, and NBC using the Vanderbilt University Television News Archive.

The map represents the total number of seconds of coverage dedicated to particular countries of the world, by reviewing and aggregating the stories told. The map's shape changes based on the volume of coverage. The Vanderbilt database includes coverage from the networks during the network evening news programs, and the "hardest" news program in the prime time on CNN, Andersen Cooper's 360. This data and analysis was then plugged into the Worldmapper algorithm, and voila, how news shaped our world that month! If you check out my TED speech, from my post on November 26th, 2009, and you can learn more about what that analysis and meta-research uncovered. Pretty shocking.

IMPORTANT NOTE: I will also be updating the "How the News Shapes Our World" map shortly. It will demonstrate how Michael Jackson's death, for the month of June (despite passing away at the end of the month), in fact, impacted the OVERALL average of what was reported on for the ENTIRE month. Become a follower of my blog and you will receive a notice when this important research and visual is posted.

IN THE MEANTIME, IRAN Vs. MICHAEL Coverage. (Iran Loses)

Recently, I used this same database to zero in how one news event can potentially affect the amount of coverage another event receives. So I did a piece of original analysis. In this case, how did Michael Jackson's death effect the coverage of Iran during the 48 hours before and after Michael's death. Really quite disturbing, to see how Iran coverage literally dropped of a cliff, despite important developments occurring there during that time. I will be looking at other major stories of that period as well to see whether Iran got the shaft more or less so. I would also be curious how social networking responded during this same period.... was the drop-off just as pronounced? Or did Iran hold its own better... thoughts anyone? 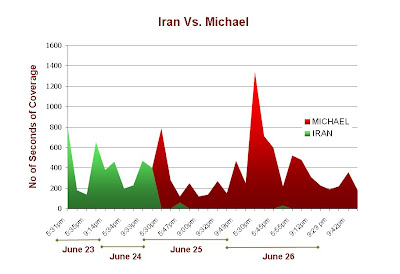 In terms of background, as you might recall, late June continued to be a critical time in Iran. The world was watching all that unfolded -- Twitter and Facebook were used to get information out, and news organizations scrambled to cover the elections and the protests in this incredibly important country to America's security and future.

And then, on June 25th, Michael Jackson died. As you would expect, this event took precedence over the continuing Iran story... but the overall decline of Iran coverage is absolutely shocking! This chart shows the number of seconds dedicated to Michael Jackson's death and Iran, two days preceding the death and two days afterwards. The data set: a minute by minute account, looking at the evening news and prime time CNN. The number of aggregate seconds of coverage across NBC, CBS, ABC, and CNN are added together. This original analysis uses the Vanderbilt University Television News Archive data set.

Now you might say, but perhaps there wasn't a lot going on in Iran at that point? In fact, it remained a critical period in the crisis. And was just days before the Iranian Guardian Council certified the results of the controversial election (June 29, 2009). See the timeline of this critical period... 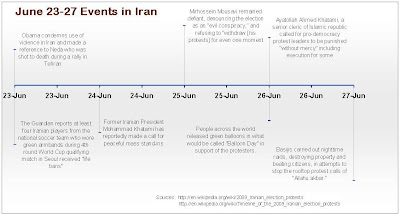 What will you find on this blog?

More broadly, what can you expect to find here? I look forward to blogging with you and talking about global news, journalism and storytelling that can change our world. I will also post original research or insights as I can. I have been working on these issues for some time. It is clear that models for objective journalism are in trouble. What is also clear is that much of journalism as we knew it, didn't do us justice in the first place.

I hope you enjoy browsing and will become a follower and contributor through commenting and suggesting ideas.